Almost a year ago, Canon announced their plans for a EOS 5D Mark III, which was expected and highly anticipated among wedding photographers. At the time, the 5D Mark II was the most popular body being used by wedding pros, and it had them, including myself, banging our heads against the wall come reception time. Why? The auto focus system was so sub-par in relation to the amazing sensor. The low-light performance was there, but the ability to lock onto a couple during their first dance wasn’t. This is why I resorted to using the Radiopopper and 580EX in tandem.

Auto-focus is a pretty crucial part in wedding photography, which is why I picked up a refurbished 5D Mark III after the market had settled. This past week, I set aside some time to get comfortable with the camera and write up this review. On a side note, a paid photography job is never the time to familiarize yourself with a new camera. While manufactures stay true to their design, there are always menu, button, and functionality differences, which can cause for slight delays when shooting.

Since a good percentage of my photos are taken in difficult shooting conditions, I wanted to test the camera in a low-light, fast moving environment. Really, I wanted to push the Mark III’s auto-focus system to the limit and see just how well it handled noise. I could slap just about any camera on a tripod, shoot at ISO 200 and get identical pictures, regardless of the camera body. I’m more curious about its performance at ISO 3200 and slower shutter speeds. I also chose to shoot with the not-so-sharp EF 50mm f/1.4 lens which isn’t all that superb in the AF department either. 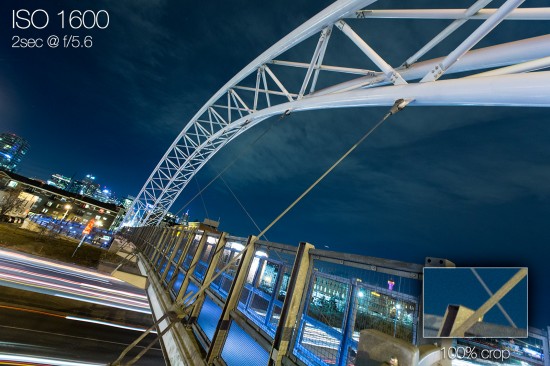 This shot is a great example of how ISO 1600 is more than usable on the Mark III. I often make prints with the Mark II at this setting, but they were negligible at times. The Mark III handles shadows, highlights and mid-tones perfectly and the dynamic range is definitely wider. But I’m not interested in this shot, because it was taken using a tripod and manually focused.

The three pictures above were all shot hand-held while walking. The auto-focus system was fast and spot on. This helps justify the expensive upgrade from a 5D Mark II to a Mark III. The keeper rate during a wedding reception just went up by a marginal amount. 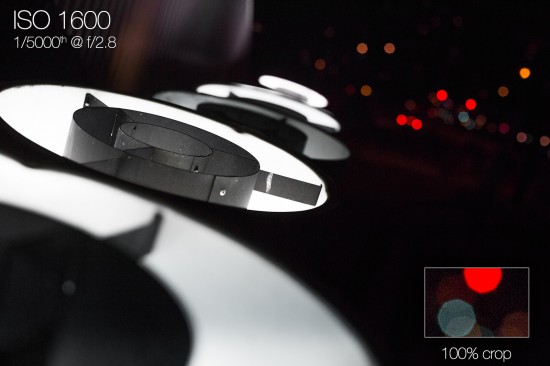 Not everything is perfect with the 5D Mark III though. The first being the focus point illumination. With the Mark II, your focus point was illuminated the entire time your camera was in the AF process, making it easy to find your spot. Since moving to a crystal based view finder, the focus point only lights up on focus confirmation. When its dark, this is a huge pain, because your AF point is difficult to see. Several other reviewers have talked about it being fixed in a firmware upgrade, but I don’t think its possible. The crystal based design has a lot of light spill, causing the view-finder to fill up with a red glow, which would make it difficult to shoot through.

The second thing I dislike is the magnification toggle in picture review mode. Going away from previous designs, Canon went with a dedicated zoom button, which is redundant and un-needed. The old design of using the AF selector buttons to zoom in and out was easy and quick. I really don’t know why they changed it. 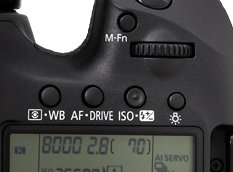 With the two cons, come two pros. The first is the ISO button on top of the camera and its raised bump. Using the camera for an entire wedding season, your fingers know where to fall, but every once and while, they get mis-aligned. Having to change my ISO frequently and quickly during a reception is a must. If I had to guess, once every 100 times I go to change it on the Mark II, my finger would fall on the AF Drive button, resulting in a 2 or 3 second delay in taking a picture. The raised bump on the Mark III helps eliminate that problem.

The second pro, is the 100% view finder, which is an upgrade from the 98% coverage on the Mark II. Why is this important? I often make a slideshow for during the reception of photos taken earlier in the day, which doesn’t allow much time for editing. Often having to shoot around clutter and distracting elements, I always had to compensate for that 2% of the view finder I couldn’t see. With the Mark III, what I see, is really what I get. A 10 second crop can fix this, but our system doesn’t allow for that. 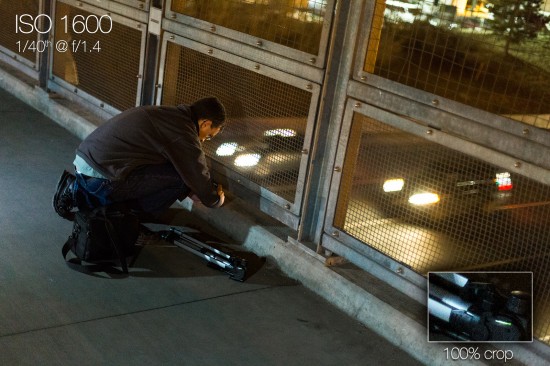 Like above, the best camera is the one you … have in your hands. I don’t know the photographer above, but I applaud him for using his gear, whatever it may be. Not everyone needs a Mark III. I’ve sold many photos from previous models, and I’m sure that one day, the Mark III will be upgraded to an even newer body.

This camera really is a solid piece of equipment. Quite literally. The build quality has improved ten fold over the Mark II, but that isn’t really all that important. Overall, the image quality and auto-focus system are industry leading and that is what matters. If recommending a camera in the $2000 to $3000 price range in 2013, the Canon EOS Mark III would be on the top of the list.

* The sample images used were processed using Adobe Photoshop CS6 with Contrast boost. No other alterations were made. Image reduction was performed using Bicubic Automatic.